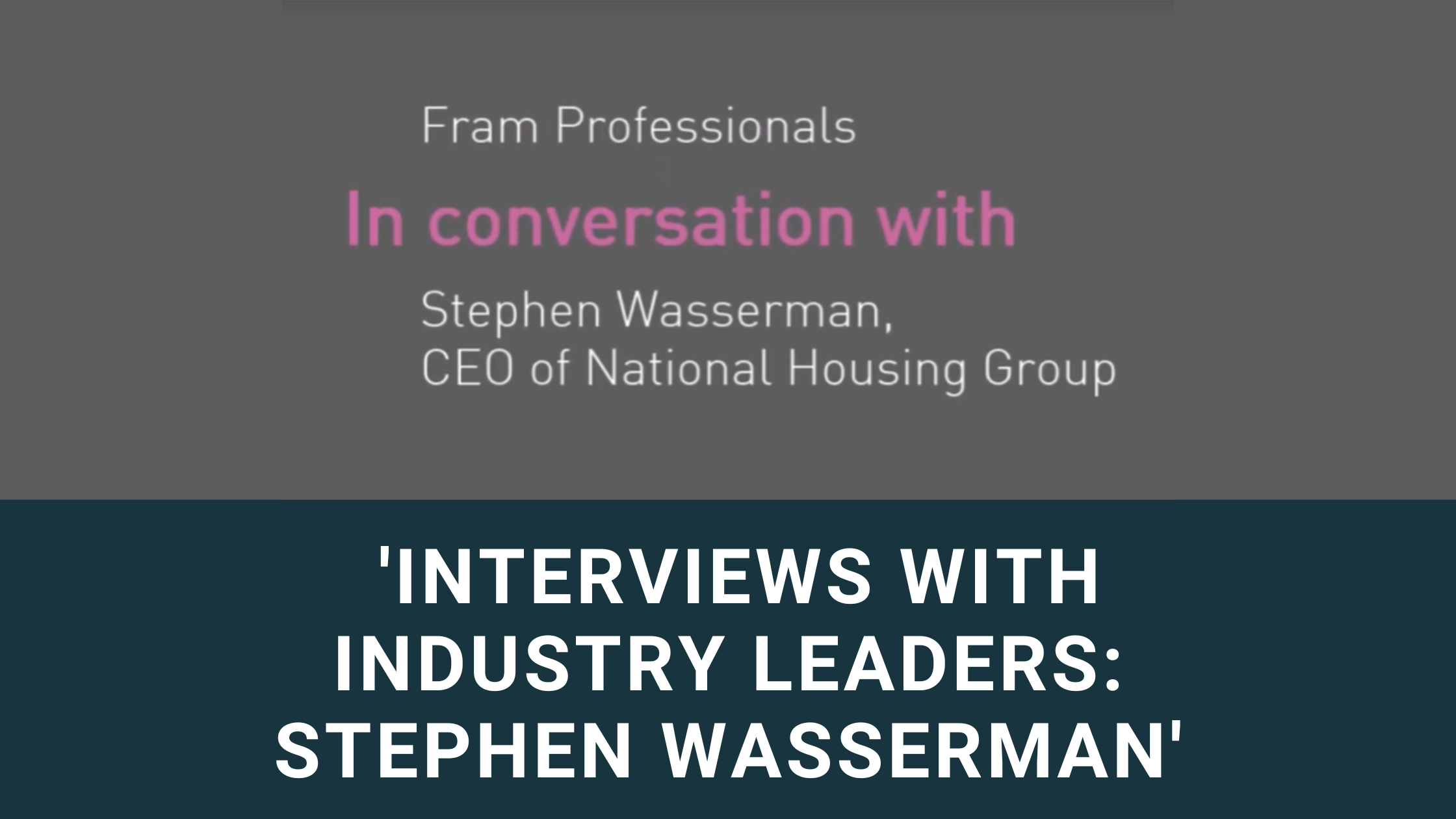 Stephen Wasserman of National Housing Group sat with Simon Roderick, managing director of Fram Professionals to record the next episode of Simon's "Interviews with Industry Leaders".

Stephen and Simon discussed how Stephen’s background led him to creating National Housing Group, how the move towards ESG practices fits in with his business model, and how he backs up his gut instincts with quantifiable metrics.

During the interview, Stephen explained his mortgage lending background led him to founding a successful business in 2007 that he sold twice, once in 2014 and again in 2017. He mentioned that he’s pleased they’re still doing well after he left the business in 2019.

During his time there he was able to see the type of social housing properties that were available and noticed a drastic difference in quality between private and social housing. He felt it could be done better.

When Simon asked about where National Housing Group stands today, Stephen explained that it has housed over 150 tenants, and that it is focusing on their green initiative, and partnering with local authorities, housing associations and charities.

Stephen and Simon discussed ESG policies, and how it comes down to doing the right thing socially and environmentally. Stephen explained that implementing ESG also makes a company institutionally more attractive. He went on to say that National Housing Group is not just an altruistic organisation, but it is a commercially minded, for profit business. When National Housing Group considers ESG it is through the lens of the tenants – what is best for them?

He gives Faringdon Lodge as a case study example. With solar panels on the roof connected to one radiator and cooking facilities in each unit, whatever happens, the tenants can heat and cook. National Housing Group is about the here and now, concerned about making it easier for people to afford energy bills.

Simon also wanted to know the advantages of starting a new business. They discussed how taking ownership of a product or service brings a lot of pride. Although there is a huge commitment when it’s your name on the line, starting your own business allows you to be creative and reactive when it matters.

Stephen’s advice for dealing with multiple projects and stakeholders is not to overcomplicate things, be reasonable, rational, and realistic. He believes it’s important to have conviction in what you are doing, but to err on the side of caution.

“You can be brave and bold and still be cautious at the same time.”

They concluded the interview discussing the future of the property market, with Stephen predicting that he doesn’t think it’ll drop as significantly as people think, and that although interest rates will go up and potentially cause a recession, they will then go down to help us out of that recession and into a period of prosperity.

You can listen to the full interview with Simon from Fram Search here.

Who are Fram Professionals

Fram Professionals is a specialist finance, legal & marketing recruitment consultancy based in Bedfordshire. They work with clients within the university “golden triangle” region of London, Cambridge, and Oxford. This is an area of high growth containing an exceptional number of innovative firms. They focus on permanent and interim recruitment from newly qualified hires through to director or partner appointments. They are part of Fram Executive Search, which was formed in 2010 and their sister firm, Fram Search, is a leading financial services recruitment firm.

An interview with Stephen Wasserman, Founder and CEO

An interview with Jonathan Alexander

National Housing Group provides high-quality, sustainable housing to national housing groups, councils and charities that are then let out to individuals as permanent housing solutions. Speak to our team today and see what properties we can offer your customers or read more about National Housing Group .

NHG provides high-quality housing to national housing groups, councils and charities that are then let out to individuals as permanent housing solutions.